Hello everyone!
First of all, let me talk about the debugging of the model engine oil needle: There are also some novice friends asking how many turns of your engine oil needle? ——In fact, this is a mistake. No matter which model car's engine oil needle has a "standard" position, because various factors will show different effects on the engine performance, such as different fuel brands , The temperature/humidity at the time is different, and the number of turns of the oil needle may not be the same.
If you want an experience value, well, in fact, no matter which engine is delivered, the main and auxiliary oil needles will be set to a factory value. For example, for our Tuoyang single-cylinder four-stroke engine, the main oil needle is turned clockwise. After death, open to 1.8 or 2 turns counterclockwise, and after the auxiliary oil needle closes clockwise to the end, open 1.5 to 1.8 turns counterclockwise. This factory value may not apply to you, but if you are really unsure, just set it up and take a look. Know the oil needle: 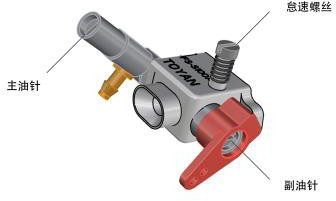 The steps of adjusting the main and auxiliary oil needles are as follows:
1、Temperature preparation and rough adjustment：
We just talked about ensuring that the number of turns of the main and auxiliary oil needles is in the factory state.
After starting the engine normally, increase the throttle slightly at this time, and it will take about 8-10 seconds for the engine to run to a sufficient working temperature. After the engine temperature reaches the normal working requirement, then start debugging.
2、Start with the rough adjustment of the main oil needle:
First, press the accelerator a few times (at the end, when the accelerator is fully open at high speed), listen to the sound. If the engine is running at the highest speed when the throttle is fully open, the sound is very sharp and dry. It seems that there is power but it can’t get up. This phenomenon is called lean oil. Please zoom in the main oil needle (counterclockwise-rich oil) to a circle of 360 degrees, and the amplitude of each adjustment is 15 degrees, and the engine is at the highest speed when the throttle is fully opened. The sound is strong and not too sharp.
3、The sound of a debugged engine is completely listened to by your fingers. It will not stick to your own voice if your fingers have been moved. Please fully open the throttle and return to the idle position immediately and listen to the sound of the engine until From high speed to low speed, the reaction of the engine can keep up with your hand speed.
4、Adjustment of auxiliary oil needle:
The auxiliary oil needle is also called the low-speed oil needle. Its function is to control the state of the engine running at low speed.
First, fully open the throttle, and then return to idling. Listen to the idling tone. If it is too low (as if there is sputum in your throat), and when you suddenly accelerate, the throttle response will feel "sluggish", generally this The phenomenon is rich in oil. Please reduce the auxiliary oil needle (clockwise) until the throttle is adjusted to the rapid response, and the low-speed operation is stable and the acceleration is linear and there is no "delay" feeling.
5、Set the idle
First, close the engine carburetor throttle intake to the minimality. The best state of the air intake gap is about 2 mm. If it is not, please adjust the idle speed screw (the idle speed screw is turned clockwise to increase the idle speed, and counterclockwise to decrease the idle speed. ), observe that the valve clearance is about 2 mm to ensure that the engine runs smoothly at the lowest idle speed without stalling.
More exciting videos:
http://i.youku.com/u/UNjc1OTM0NzY4MA==?spm=a2h0c.8166622.PhoneSokuPgc_2.dportrait
wholesale